Well the 11th-13th July, I decided I would take any very first ‘solo’ holiday to Cornwall for the Sea, Salts and Sail festival. So having driven the long journey from North Wales I arrived late and tired at my campsite. Decided to walk into the village, eat and join in with the festivities.

Well I found a nice restaurant and sat listening in to everyone around me. (Not sure I was cut out for eating in restaurants on my own- I literally had to bite my tongue to stop myself from joining in on others conversations!) Well, after food I wandered down to the harbour where the crowds were being entertained by a local male voice choir. After a couple of drinks I decided to wander home to my campsite. Oh dear – hadn’t realised that it was a bit of a one way system! I got sooooo lost walking home!!! Tramping through fields in the rain. At one point I was scared to death by a badger! Eek! My phone had died so no chance of getting my whereabouts by GPS!

Anyway, the next day I wandered back to the village and watched the various activities from the shore, enjoyed mooching in the artisan shops. There were some great bands on the stage, I spent a lot of time videoing a fabulous older lady dancing away to her hearts content. Well, once again I was earwigging to a conversation between a couple next to me, the gentleman was saying how much he had enjoyed his experience on one of the old Luggers, and wasn’t it fortuitous that he had bumped into the captain and he offered him a sail. So at this my ears pricked up and I stuck my nose in! Excuse me please, I said, did you say you had been out on one of the Luggers? Did you say you know the Captain? Do you think he would let me join them??? I eventually let the poor chap get a word in edge ways, and he said he’d introduce me. So, long story short, I had the pleasure of sailing on one of the beautiful luggers called Barnabas  here she is… http://www.mbla.co.uk/barnabas.htm

It was a beautiful day and there were quite a few of us traditional old boats racing past the “Mousehole” cave and back towards St Michael’s Mount. I have spent many happy weeks and months in Cornwall over my life, but that day was the most memorable ever because as an adult I got to see some of my favourite landmarks from the sea. 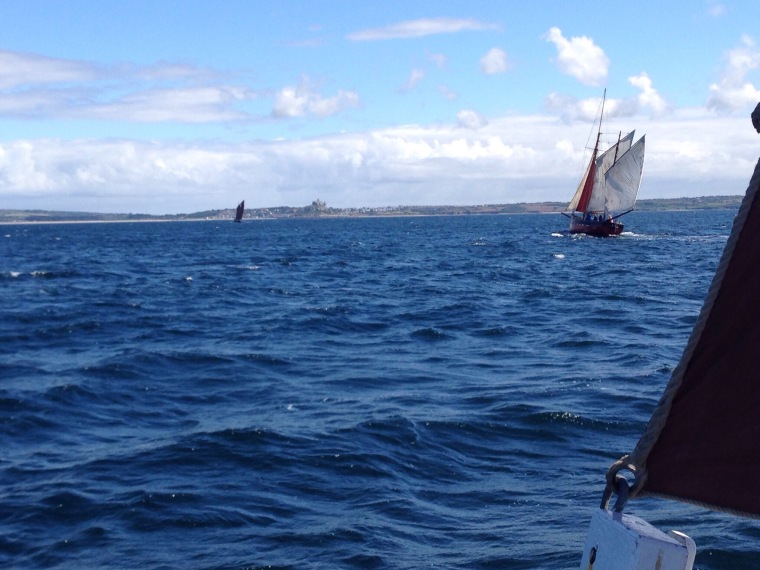 Later that day I had a proper Cornish pasty, met up with some friends and watched my friend conducting Porthleven Town Band… The next day I started my journey home…